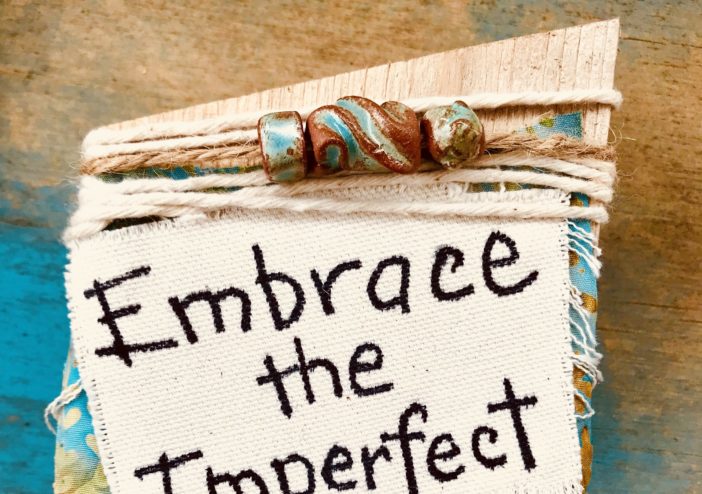 Do you feel like you’re perfect at everything you do? Well, let’s just cut through the chase and I’ll answer, “Umm, no.” For those of you who would dare to nod your head up ’n down, then I think someone’s tellin’ a lil’ white lie, and my daddy would never…

Think about this one. Aren’t some of us darn good at applying the Double P (that’s perfection pressure) on ourselves and sometimes others. Okay, I’ll be the first to admit here on my very own blog that I am so guilty of that! So there! Now that I’ve just finished my first therapy session, let’s move on…

What if I said, “embrace your imperfect self?” What would that mean to you? If we understand the fact that we are imperfect, then what keeps us from being our authentic self? Was it the boy in third grade that called you “four eyes,” or maybe someone told you that you weren’t good enough in dance. Maybe someone commented “I hear you’re just going to do your little craft business” when actually you were gonna kick butt as a real artist. Those real stories are mine.

Deep down inside I knew I was a dreamer, and whatever people said to me only hurt me temporarily. I knew God had plans for me, but I was just going to continue to be me. I just love that sayin’, “Just be yourself. Let people see the Real, Imperfect, Flawed, Quirky, Weird, Beautiful, and Magical person that you are.” If you’re going to move forward in your life and in business, you’ve got to let go of who you and others think you’re suppose to be and embrace who you are. Get out there, and don’t worry ‘bout messing up. You’re gonna make mistakes. We all do. That’s life.

For many years my momma ’n daddy sat back and watched me make mistake after mistake. As much as they probably wanted to, they weren’t into “fixin” anything nor did they give their opinion. They let me figure out life on my own, and I’m forever grateful. It allowed me to become strong and independent. Every time I thought life was good, I got knocked back down. You do that enough times and over time, God has a way of humbling you.

Sometimes, we’ve got to hit a few brick walls in our lives to see that we need to shift and change to learn what’s really happenin’ around us. Sometimes we just don’t get it. Look yourself in the mirror and say, “I just don’t know it all.” Ouch! Now y’all I know that didn’t feel good, but sometimes you just gotta face it. NOW we can redirect and focus.

So, do you remember your first job, and how accomplished you felt?! I can remember before I set sail to the Big H-town (that’s Houston, TX, y’all), I had a plan. Yes, a plan before I moved miles away, out from underneath my momma ’n daddy’s wings. I had a short-term goal and a long-term goal, and I was bound and determined to accomplish them! A girlfriend and I from college planned on being roommates, but I was moving first to find a job temporarily, then pursue my dream of becoming a model.

I moved in with a family friend in H-town for a couple of weeks, interviewed ’til the cows came home (at least that’s what I thought), and landed my first full-time job as a secretary working with the senior engineer of Bernard Johnston Engineering firm. Their offices were located right across from the Galleria, and I thought I’d died and gone to heaven. I couldn’t believe all the fancy hotels, restaurants, and shoppin’! Man, I was excited! THAT was my short-term goal 🙂 The day I started at Bernard Johnston, I set my sights on the long-term goal.

I thought I had it all mapped out. I’d shoot a few photos, interview, and sign with an agency, but it wasn’t that easy :/ Long story short, and only one year later with my portfolio in hand, I walked into several agencies, but there was no signing. I had no experience, only photos. You talk about bummed, but I told myself, “I’m not giving up!” Never, ever quit on your dreams. The following weeks, I started cold calling to different boutiques and stores in the Galleria area and landed several informal modeling and runway jobs. All I needed to do was build a resume 🙂 I still had to pay the bills you know, so I worked almost full-time with Gerald Hines Interest as a contract secretary. I hustled like no tomorrow, because my dream was to “make it” in modeling…whatever that meant. Ha!

Fast forward about two years later, and I was signed with an agency. I entered the full-fledged dog-eat-dog world of modeling. I hate to tell y’all, but it’s just not as glamorous as everyone thinks. I was fortunate enough to work with Neiman Marcus, Saks Fifth Avenue, Sakowitz Furs, Cache’, and Macy’s and traveled overseas to model, but I had to keep the weight down to get the jobs. I did think it was pretty cool to strut on stage with some bad-A clothes and accessories, but I was in a world full of critics. Nothing was good enough…my weight, the color of my hair, my big calves, my look or walk on the runway. When it came to print modeling…oh gosh, that was a whole other story. In print the photographers were always zoning in on those tight face shots. Lord Have Mercy. I really didn’t know that my face was crooked, until I started modeling. Boy, that’ll build a girl’s self esteem, right?! I couldn’t help it that my momma left a cup of gasoline out on the driveway when I was 2, drank the whole cup, and that’s where I probably got my facial scarring from y’all!!! No lie!

No seriously, looking back on this story, I realize that God had other plans for me. He allowed me to go through that process. Thank you Jesus. That was one of those times where I needed to let go of who I thought I was suppose to be. There was a pruning of my heart, and life continued…

Never forget the journey. Keep embracing your imperfect self. Growth is painful. Change is painful. But nothing is as painful as staying stuck somewhere you don’t belong.